Ever Ready Hose Company No. 1 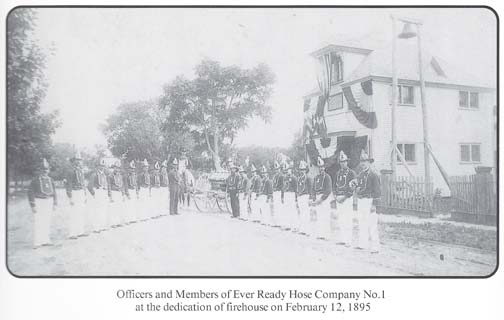 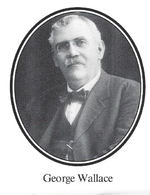 With the plans of constructing a municipal water supply system in 1893 that could supply water under pressure underway, which offered the possibilities for more effective fire fighting, a committee was formed to explore the possibilities of establishing a new fire company in the Village of Freeport. This committee consisted of George Wallace and James R. Smith, who were members of Excelsior Hook and Ladder Company, and later, charter members of the new hose company. On October 9, 1893, this committee along with eight other residents petitioned the village for that purpose. On January 2, 1894, Ever Ready Hose Company was organized with George Wallace elected as Foreman, William B. Osterhout as Assistant Foreman, Frank S. Snedeker as Secretary and James R. Smith as Treasurer. 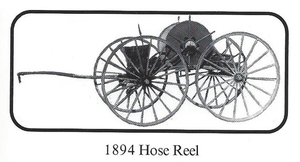 The Company was outfitted with a hand drawn hose reel and purchased uniforms at a cost of $ 7 each. The Company's first organized activity was a parade on Bay View Avenue where they displayed their new hose reel and uniforms on July 16, 1894. That year they participated in two other parades in Southampton and Jamaica. On December 1, 1894, a lease was signed on a parcel located on Bedell Street, south of Smith Street where a firehouse was built at a cost of $324 and dedicated on February 12, 1895. Like all firehouses at that time the floor was raised about eighteen inches which required considerable skill to take advantage of this inclined floor so that when the apparatus, which was pulled by hand, reached the street it did not spill over, before a run of maybe a mile or more.

During a fire on January 21, 1896, the newspaper Queens County Review reported the following "About half past six on Tuesday evening, Mr. Aaron Pettit, who resides on the Milburn Road south of the turnpike took a lamp in his hand and was going upstairs when the lamp exploded in his hands. He ran out and in a few moments the place was a mass of flames. The alarm was given by ringing the bell of the Methodist Church and the telephone was brought into requisition to ask for help from the Freeport Fire Brigade. Without an instant's delay the Ever Ready Hose Company responded and started with a horse loaned by Mr. Smith Williams. 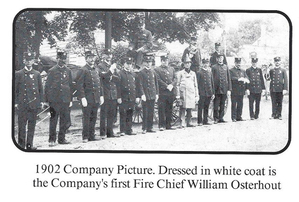 The distance was covered in a very short space of time, but when they arrived at Milburn the roof collapsed. Water was obtained by breaking the ice of Silver Lake and in about three quarters of an hour the fire was under control." The above article chronicled the early use of a horse pulling an apparatus to a fire call which did not become a regular occurrence until 1908. The same newspaper commented on June 4, 1897, the following: "It is conceded that in actual service in fighting fires the Ever Ready Hose Company No.1, of the Freeport Fire Department is second to no company in the department, and probably is as efficient as any volunteer company on Long Island." 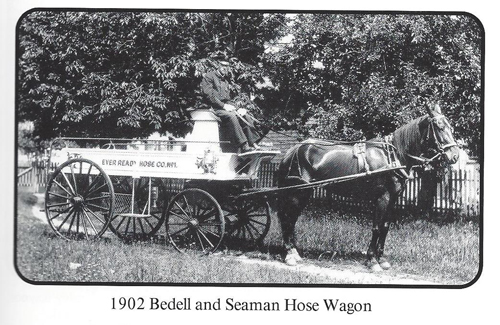 The Company's second apparatus was a hose wagon constructed by Theodore Bedell and Frank H. Seaman at a cost of $250 and delivered on March 12, 1902; the old hose wagon was given to Hose 3. In 1903, the firehouse was outfitted with a telephone for "fire purposes only" and in 1907 a "drop harness" system was installed.

The Company's next hose wagon arrived in 1911 which was manufactured by A.F. and S.C. Stewart Company, Rochester, New York costing $595. This apparatus had a capacity to carry 1,000 feet of 2-inch rubber hose along with necessary equipment (2 Babcock fire extinguishers, axe, crow bar, shovels, 4 Dietz lanterns, wrenches, couplings and nozzles) and six men.

On April 17, 1915, the members of the Company moved into a new firehouse, on land donated to the Village by company member Cadman H. Fredericks, on Southside Avenue between S. Main Street and Bedell Street. The new structure, which cost $8,500, was a brick two story high, measuring 26 x 40 feet and horses were permitted to be kept inside quarters.

However, this was short lived when the Company received a new Mack Motor Chemical and Hose Wagon that cost $3,000 on August 29, 1916. This vehicle was an A. B. model, worm driven, 40 horse power, 4 cylinder Mack engine, capable of 30 miles per hour. A capacity of 1,200 feet of 2-inch hose and a 35-gallon Holloway type chemical tank. 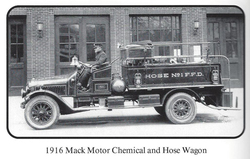 The next apparatus that the company received was also a Mack Truck which was put into service on December 12, 1929, equipped with a "Foamite" generator. The apparatus was christened by charter member and former 1st Assistant Chief James R. Smith, oldest member of the Department with 55 years of service, by breaking a bottle of champagne on the radiator.

Shortly after the Company's inception, a tournament team was formed and they showed to be very competitive in different firematic challenges of the era amassing a large quantity of trophies and awards in these contests. A specialty was the Horse Hose Contest in which the horses, Ben and Reuben, with their headstalls on were placed 25 feet behind the hose wagons,with the harness on the ground. At the drop of the flag the horses were rushed to their places and harnessed, the crew of seven men sprang to their places and the 250 yards to the finish line was covered at a keen gallop, while the crew struggled into their rubber coats and fire helmets. Two men dropped off with the hose at the hydrant and coupled it, two lengths were laid and the pipe man and his assistant also dropped off, broke coupling, screwed on the nozzle and time was taken when the water struck the target. In 1930, the team turned to motorized racing and went on to win the Freeport Home Day Tournament three years in a row. By 1933, the team was known as the "Nighthawks" a name that they retain to this day. In 1936, they purchased a new Ford pick-up truck which they converted for motorized competition.

On April 15, 1941, Hose One and Hose Two apparatus were involved in an auto accident, with each other, at Main Street and Grand A venue in which six firemen were injured. Due to this accident, plans were made to replace this pumper and on February 21, 1942, a 500 gallon Mack pumper with a 150 gallon booster tank, 150 horsepower engine and a booster reel mounted in rear were placed into service. As the nation mobilized for World War II the following Hose 1 members served in the armed services: Frank Boyden, John Sutherland, Gus Hager, George Burton, Ed Warner, Daniel Cronin, Harry Gritmon, Wilton Hammerl, Clifford Raynor, Ed Muller, Joe Alfano, and William Fichter. The members who remained also contributed to the war struggle by offering their 1936 Ford racing truck to the war effort and by serving in the Civil Defense and conducting newspaper and scrap drives. 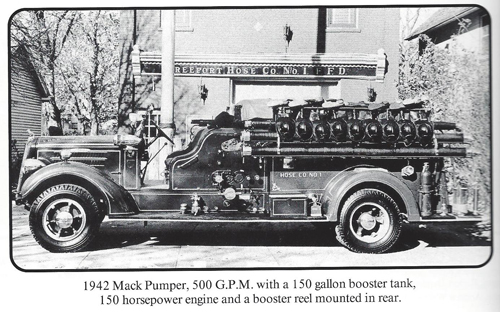 The next racing team vehicle was a 1950 Ford pick-up with an eight foot body, four speed transmission and a 3/4 ton chassis which was acquired in December 1959, which was kept until 1964, when the team was disbanded. 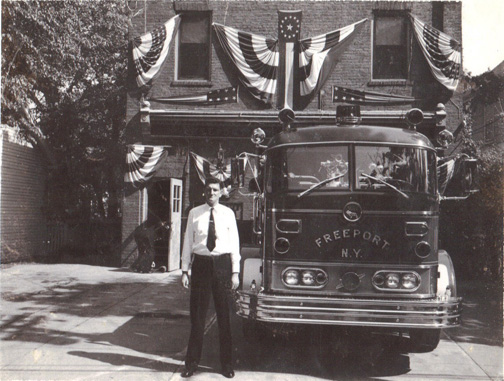 The Company'snext apparatus was received on May 9, 1961, when they received delivery of a 1,000 gallon Mack pumper with a 500 gallon booster tank. 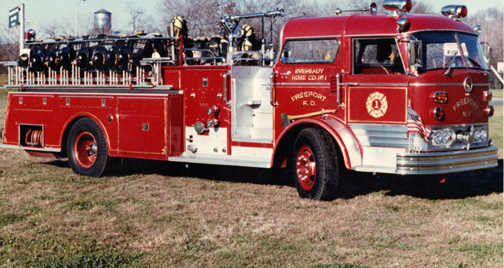 In 1963 the Company began the process of designing a new firehouse that would eventually be built on the westerly adjoining property to the existing firehouse. On February 21, 1965 the new Company quarters were inhabited. 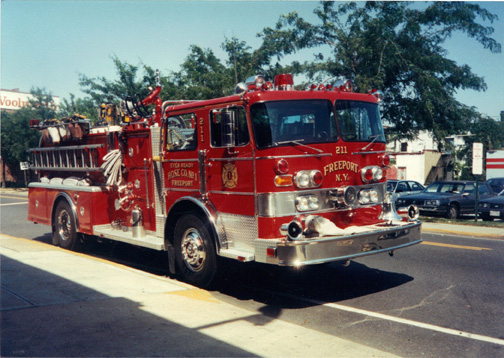 The next apparatus utilized by the Company was placed in service in February 1979, a 1,250 G.P.M. Oren pumper with a 500 gallon booster tank, raised pump panel and twin Mattydale cross-lay with 1 ¾  inch hose. 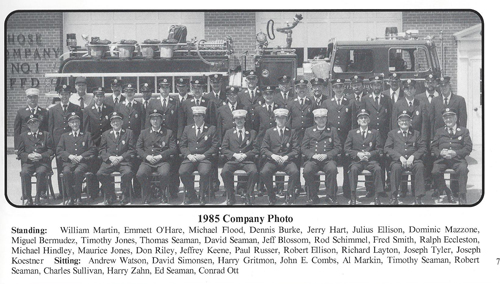 In 1999 the Company received two apparatuses: a 1962 White Corporation six-wheel drive Army surplus truck and converted it to a heavy duty flood response apparatus. This Disaster Assistance Response Truck (D.A.R.T.) designated as Unit 211-2 is equipped with a trailer, pump and de-watering equipment. Also an R.D. Murray Pumper equipped with a 1750 G.P.M. pump and a Spartan 10 man cab, was placed in service. 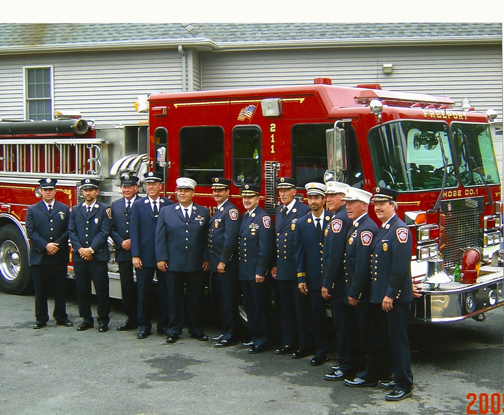 In July 2005 Hose 1 along with the Chiefs of the Freeport Fire Department marched in a parade for Hose 1's  sister company of Mahopac, New York. Mahopac and Hose 1 have had a friendship dating back to 1974. 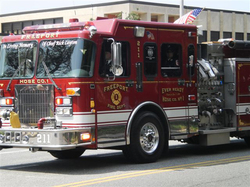 On January 5, 2009 Hose Company No. 1 suffered the tragic loss of 1st Assistant Chief Richard Layton, the second line Chief the department lost within 5 years. The Chief had just finished cleaning up from a working fire the night before and was undergoing a scheduled routine hip surgery when he passed away in the operating room. Chief Layton was a very active Chief serving for many years as a Chief Instructor with the Board of Instructors and Rescue Diver with the Underwater Search and Rescue Team. Ex-Chief Jerry Cardoso was elected to finish out Layton’s term and became the department’s first and only member to be elected twice to serve as Chief of Department. 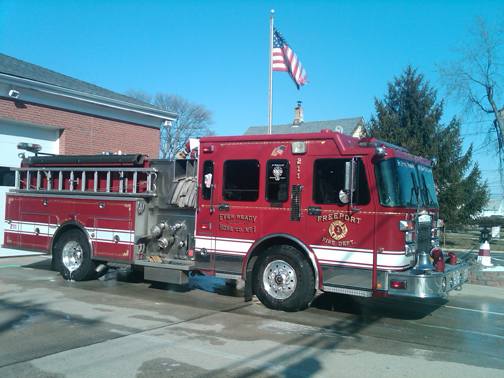 Freeport hosted the 2nd Battalion Parade on Saturday night, August 10, 2013. As the host department Freeport FD wasn't competing for trophies but Chief of Department, Stanley Kistela, of Hose Company No. 1 proudly lead 173 men down Woodcleft Ave to the cheers of our residents. Mahopac Fire Department marched with the Freeport Fire Department as our quests.