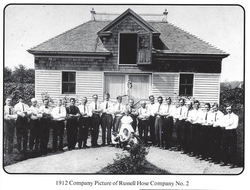 In November 1911, Russell Hose Company #2 of the Roosevelt Fire Department was formed by a group of forty members and they elected William F. Pearsall as their first foreman, F. F. Smith as 1 st Assistant Foreman and Charles Eppie as 2nd Assistant Foreman. They occupied a barn for a meeting place on the west side of Main Street, just north of Lillian Avenue. The area, between Main Street and Union Street and from Seaman A venue to Colonial Avenue, was known as Russell Park named after the great stage star Lillian Russell which is also the origin of the Company's name. Miss Russell's real name was Helen Leonard after which Leonard Avenue was also named. Their first fire apparatus was a hose reel which was replaced on November 20, 1912, when they purchased on auction Ever Ready Hose Company No. 1 's horse drawn hose wagon that was painted white.

The Company paid for all of its equipment, apparatus and property and this was done by many types of fundraisers including: a dance in 1911, a masquerade and ball, a minstrel and dance and a pie, cake and bread sale all in 1912. In 1913, the Company acquired property on Leonard Avenue and built their first firehouse at a cost of$4,000. The Company became motorized with its next apparatus, a Pope- Hartford motor truck donated by James Coward in 1916 with a hose tray body attached. In 1921, the Company acquired their next apparatus, a Fulton  ton hose wagon manufactured by Fairchild Motors of Farmingdale. 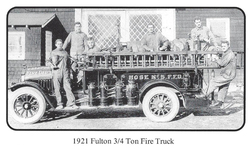 Local residents of Russell Park began circulating a petition in the aspiration that their area would be annexed into the Incorporated Village of Freeport. This petition was approved by the Village Board on April 30, 1923, and Russell Park became part of the Village of Freeport. Russell Hose Company was reorganized as Hose Company No. 5 and their members added to the Freeport Fire Department roster. 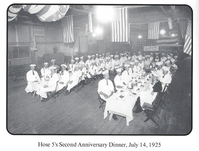 The Village paid rent to the Company for the use of the firehouse, land and equipment from 1923 through 1927 when the Village purchased the building and remodeled it in 1929 with new heating and plumbing and the exterior was stuccoed and painted. There was a dance hall on the east side of the building which was torn down so that Starr Place could be cut THROUGH TO Independence Avenue. 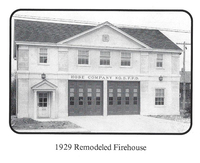 In 1945 or 1946, the Village acquired four lots from William Pearsall, Sr. on the west side of the firehouse and at a later date one lot behind the building which accounts for the present acreage. In 1952, construction was begun on a new firehouse on the same site as the former building. This structure was completed and the dedication was held on March 15, 1953. 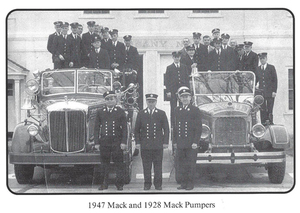 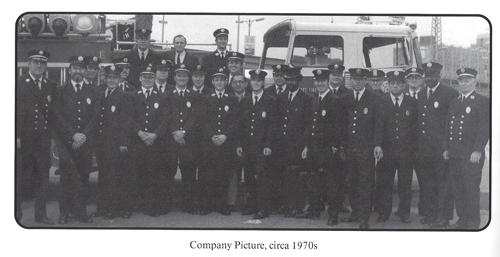 In April 2008, the Company's newest fire truck arrived, a 2008 Ferrara 1,500 gallon per minute pumper with a 500 gallon water tank, a 10 gallon foam tank and powered by a six cylinder diesel engine. 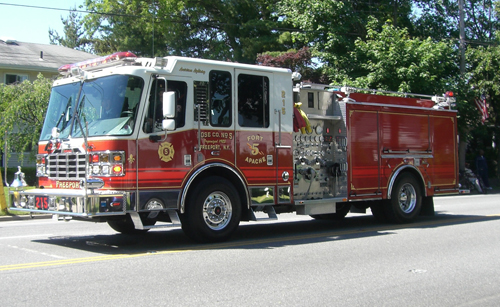