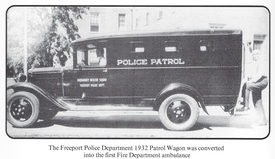 On May 21, 1929, John Armstrong was assigned the task of forming a rescue squad with an authorized strength of 21 members. A meeting was held on September 24, 1934, where a discussion was held of forming a Floodlight, Salvage and Rescue Squad comprised of three members from each of the seven companies. A proposal from that meeting was made to mount floodlight lamps on an existing piece of apparatus; however, no recommendations were made as to the salvage duties of the proposed squad. The first official meeting of the Rescue Squad was held on November 23, 1934.

On May 31, 1935, a "Signal 9" was designated as a call for the First Aid Squad, which is still in use today. The Squad's first apparatus was secured on July 11, 1935, when the former Freeport Police Department patrol wagon was repainted and placed in service as a first-aid unit which was equipped with cots, stretchers. bandages, liniments, tannic acid (for burns), grappling irons, Underwater diving helmets and masks, inhalators and oxygen tanks. 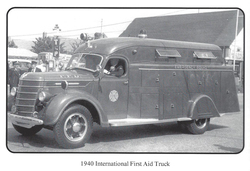 On December 23,1940, the First Aid Squad received its next apparatus, a new 1940 International First-Aid Truck. In April 20, 1948, the Rescue Squad, which by this time was known as the Emergency Relief Squad was incorporated into the Freeport Fire Department By-laws. In 1957 the Squad received a new rescue apparatus built by the Flexible Company.

In 1958, the Emergency Relief Squad informed the Fire Council that the squad was in favor of becoming an Emergency Company of the Freeport Fire Department. On February 17, 1959, an organization meeting was held on the new Freeport Fire Company No. 9. Representative of the now de-activated Emergency Relief Squad reported that the active rolls of the squad have been closed as of midnight February 2, 1959. The members of the former Squad were given one year to decide whether they would stay with their original Company of join the new Company No.9. The first officers were Lionel Gillespie as Captain, William J. Munda as 1st Lieutenant and Charles Schilling as 2nd Lieutenant.

At the November 1961, Fire Council meeting it was decided that when Truck Company No. 1 receives its new Seagrave aerial ladder truck, the 1961 Mack floodlight truck will be assigned to Emergency Company. On December 15, 1964, the Company's name was officially changed to Emergency & Floodlight Company #9. In 1965, the Company moved into the new Fire Headquarters building occupying the west side of the building. 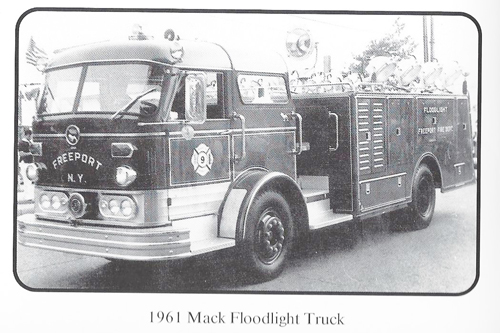 In December 1968, the Village Board approved that a bond be issued, in the amount of $45,000.00, to purchase a new apparatus and on April 15, 1969 a contract was signed with the Gertslenslager Company for a new rescue truck. On November 20, 1973, a new Dodge ambulance was placed into service until it was replaced in 1980 by a new Ford ambulance. 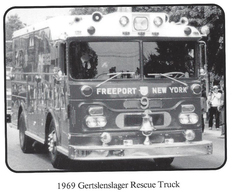 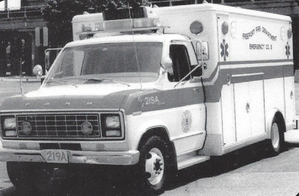 In the early 1980s the Company made numerous changes: surrendering the use of the floodlight vehicle, which was re-assigned to Hose 3 for use as a transport vehicle for the Department Band. Also they acquired a Hurst Tool better known as the "Jaws of Life" and changed the name of the Company to Emergency Rescue Company No.9.

During the Department's Annual Volleyball Tournament held on March 3, 1985, Fireman E.M.T. Frank DiSorlo had just completed attending to an injured member when he was fatally stricken by a heart attack. Frank was awarded the title of Honorary Chief of the Freeport Fire Department in recognition of losing his life in the line of duty. 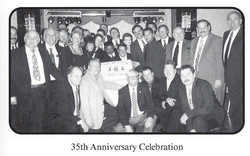 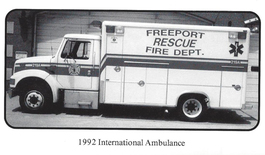 In 1990, Emergency Rescue Company placed into service a new Simon-Duplex Saulsbury Heavy Rescue truck followed by a new International ambulance in 1992. In August 1996, a Ford Explorer, which was formerly a spare fire chiefs car, was transformed into an "EMS Fly Car." The concept of the "Fly Car" was to have a vehicle containing advanced life support equipment and staffed by a certified EMT who would immediately respond to the scene of a medical aided. This vehicle was replaced by a 1999 Chevrolet Tahoe and is currently known asa Rapid Response Medical Unit. 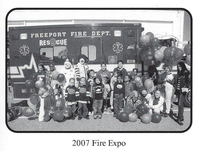 In 2004, the Simon-Duplex Saulsbury Heavy Rescue truck was transferred from Emergency Rescue Company No. 9 to Truck Company No. 1 as a technical rescue unit. In 2007, the Company's current apparatus was placed into service, an International Med-Tee ambulance to be utilized for the Company's main responsibility and objectives which is providing advanced life support and caring and transporting of the sick and injured. In 2007, the Compan responded to 1,387 aided cases which requires their personnel to have in excess of 200 hours of training to be certified as a New York State Emergency Medical Technician (EMT) and more than 1,600 hours of instruction to be qualified as a Paramedic. 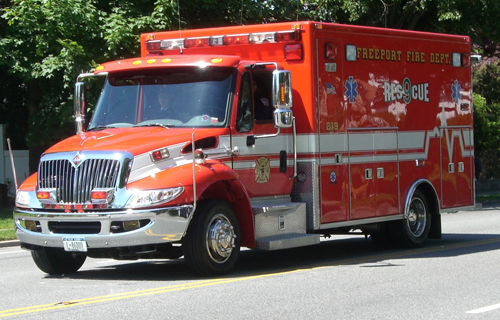